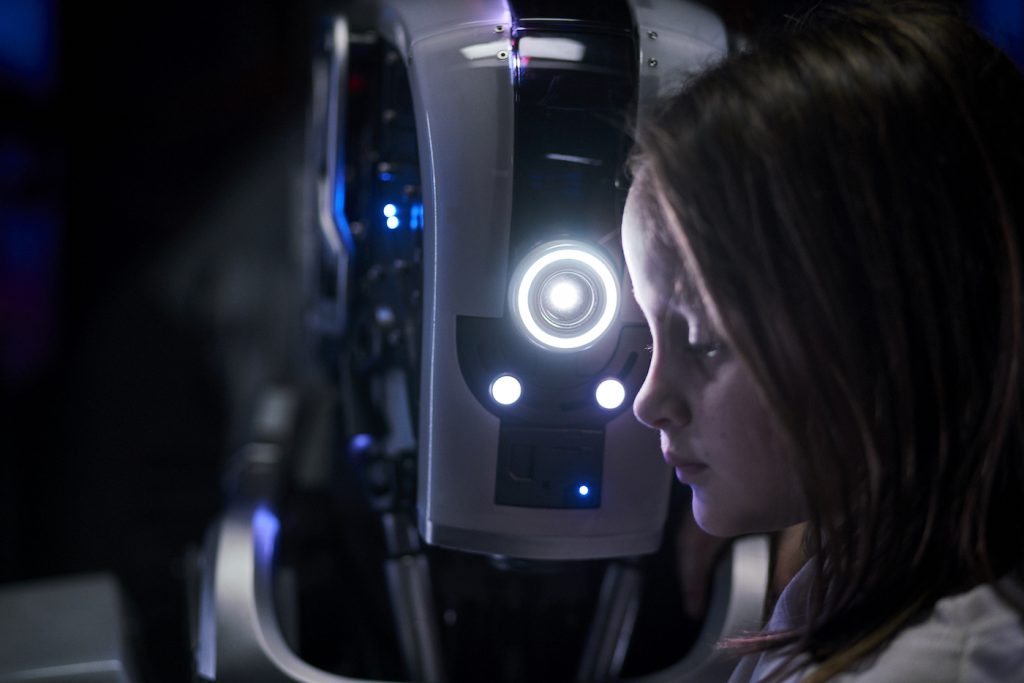 With one mechanized foot in the past and one in the bright future, I Am Mother was influenced by some of the best classic and modern science fiction movies ever to be released. Looking to Alien, The Terminator, and Blade Runner, Lahiff wanted to ramp up the mystery and the suspense as far as it would go without snapping until it was time for the big reveals to see the light of day. Even so, you can’t dwell in the past, but must emulate what’s being done in the context of 21st Century sci-fi as well.

“There are more contemporary independent films like Moon, Ex Machina and Annihilation which don’t rely on quite as many classic ‘tropes’ of the more action- or horror-oriented genre films,” he said. “The sophistication of the way those newer stories were told and how information is gradually released to the audience as the central characters discover things was inspirational to me.”

In the end, however, the iconic features from over 30 years ago stood as a golden exemplar of how to let your characters take the wheel and keep the audience engaged.

For example, Daughter’s character arc takes her from wide-eyed wonder and curiosity to full-blown maturity and seriousness. Lahiff compares this flip of the coin to some of the most badass females in the world of genre.

“I love coming-of-age stories and hers is a ripper,” he said. “Her transformation is one reminiscent of Sigourney Weaver playing Ripley in Alien or Linda Hamilton playing Sarah Connor in The Terminator. Daughter goes from a neatly-dressed teenager to an axe-wielding, grime-covered saver of humanity! She learns what it means to be human (and humane) and her transformation from Daughter to Mother is to be admired.”

Like the editor stated above, themes of humanity and compassion sit at the crux of the story. To let those motifs really shine through, the main action is told through the eyes of Daughter, who knows what humanity is (she’s regularly schooled by Mother), but craves the company of others like. Indeed, one of the pressing plot questions asks why no other frozen embryos—of which there are thousands housed in the bunker—were realized as people. Then there’s the mystery of whether or not it’s actually dangerous to go outside.

“The big twists definitely affected the editing,” Lahiff continued. “In the lead-up to Daughter discovering she wasn’t the first born child of Mother, we needed a way to keep ahead of the audience and present that revelation in the most impactful way possible. Jumping forward in time to see Daughter enter the furnace room, pull open the furnace drawer, sift through the ashes and finds the human remains, all intercut with her finding the failed test results from a previous Daughter – was a way we could hold off the reveal for as long as possible.”

With hands-on input from Sputore, the editing room for I Am Mother became an incredibly creative space founded on a system of trial and error. There were no wrong answers and when all was said and done, the finished cut was a beautiful mosaic of different storytelling approaches.

“In every facet of production, Grant would strive for perfection,” Lahiff said. “He brought this to the edit room and it influenced my process in a fundamental way. We left no stone unturned when investigating the potential of every scene. We’d push ideas until we broke a scene, then we’d retreat to the point we felt was perfect. This was our way of ‘pressure testing’ everything. If something wasn’t working, we’d investigate why instead of just cutting it out. If there was a clunky edit, we’d find a way to fix it: split-screens, fluid morphs, speed ramps—we did it all. My timeline was a work of art.”

And yes, it can get tedious if you keep flitting back and forth between the same three characters for almost two hours with no variety in the roster. In order to avoid audience fatigue for Mother, Daughter, or Woman, a lot of emphasis was put on the post-apocalyptic haven that serves as the main setting. As Lahiff puts it:

“We let the bunker shine as the future birthplace of humanity and showed off its vast dark corridors and great set design With such great imagery from cinematographer Steve D. Annis, we showed off the technical marvel in all its glory.”

That being said, Rose Byrne is so good as the voice Mother, that you’ll be enthralled by the character, increasingly scared of her as she arrives on the screen. The on-set body work by Luke Hawker completes the illusion, but his voice, which they used for filming, posed a bit of a unique problem during the editing stage.

“We all got very used to Luke’s voice in the edit room and admired his gallant efforts to speak-up over the motorized fans built into the suit to keep him cool and the servos to help control the robot’s facial features,” Lahiff added. “But, eventually the time came to replace his voice with Rose Byrne’s, who brought another level of depth and warmth to Mother. It took me weeks to go through and re-craft the sound work to fit in Rose’s voice but I carefully re-matched her dialogue to fit in with Mother’s head turns, ‘eye-ris’ spins, smiles, and tense pauses.”

While Netflix has gained a bad rap for its movies, I Am Mother is a tense and satisfying entry into the company’s streaming pantheon that could just as easily have played widely in theaters. As such, it’s definitely worth a watch for any and all sci-fi fans.

“Editing I Am Mother was an amazing opportunity to help create the kind of film I grew up admiring,” said Lahiff. “It is the type of film that inspired me to become a filmmaker, so this was a great case of loving your job!”

I Am Mother is now streaming on Netflix, but I’ve gotta give you another warning before I go: the movie opens with a tender sequence set to “Baby Mine,” which will bring all those Dumbo tears rushing back. Make sure a box of tissues is nearby!